Mexican Saul “Canelo” Alvarez and American Daniel Jacobs faced off inside the square circle on May 5 (AEDT). The bout headlined the fight card on DAZN, taking place at T-Mobile Arena in Las Vegas, NV.

Alvarez entered the ring as the defending WBA (Super), WBC and The Ring Middleweight champion, also holding lineal middleweight titles. Jacobs put his IBF Middleweight title on the line. In summary, the pair squared off in the championship unification.

The 160-pound bout went the distance. After twelve rounds of professional boxing, the verdict proclaimed Canelo as the winner by a unanimous decision.

Ultimately Alvarez retained his titles, as well as added a new championship belt (IBF) to his collection. In addition, he updated his record to 52-1-2, 35 KO, following his previous bout at super middleweight against Rocky Fielding, which he won by TKO in Round 3, after claiming the middleweight belts against Gennady Golovkin by majority decision. 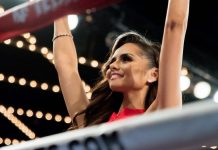 UFC Fight Night: Whittaker vs Till

UFC 251 features the 13-fight bill with three titles contested on the top of the main card. The event airs live on pay-per-view on...